Claudia Paulson poses for a portrait at RIT on Jan. 29, 2018. Paulson, who recently shaved off almost all of her hair, said the experience was “liberating.”

Rochester Institute of Technology Women’s swimmer Olivia Phillips competes in the 200-yard medley relay during the meet against William Smith College at Judson Pool on the campus of the RIT in Henrietta, N.Y. on Jan. 24, 2018. Phillip’s relay team finished in first place, while the team as a whole beat William Smith 153-76.

Elizbeth Rivera (cq) holds a mirror up so that Jeryca Starling can see if she likes the placements of the marks prior to having her ears pierced, at the Marketplace Mall, Henrietta, N.Y. Nov. 17, 2017. Joseph Starling brought his daughter Jeryca to the Marketplace Mall to go shopping for her 11th birthday.

Shamir Brown, left, watches as Joseph Vasta, right, performs a kick flip with a friends skateboard, at a warehouse rented by their friends, in Philadelphia, PA, Nov. 25, 2017.

DESCRIPTION: We are seeking applications for two students to serve as lead producers for our program’s photo coverage of the Special Olympics New York State Games February 23-25, 2018. You will share project management responsibilities for all aspects of this event, including pre- and post-event planning. Responsibilities include, but are not limited to: photographer and picture editor coverage assignments for opening and closing ceremonies, as well as all sporting events; web content publishing; social media strategy for visuals; infrastructure decisions around IT and networking support; image archiving; and communication with Special Olympics representatives.

REQUIREMENTS: Oversight at this level requires superior leadership skills, clear communication, an attention to detail and an excellent sense of humor. In addition, you will be asked to bring ingenuity, ideas and good problem solving to the event as issues arise and utilize a diverse group of students who come to be involved in our coverage in a variety of ways. You must have the ability to get work done without being asked, and have strong and balanced principles about delegating work to others. You must be levelheaded under pressure and be organized well in advance to avoid mishaps. You will both be required to begin work before and during Winter Break, in addition to Spring Semester, as part of this course. The bulk of your hours will be spent during Winter Break, the weeks leading up to the games and three long days during the games themselves. After the games, though the hours will subside considerably, you will be responsible for preparing the archive for the Special Olympics, completing any unfinished materials for publication and completing a thorough post-mortem. We hope to cover the 2019 games as well, which will also be hosted in Rochester, so you will be responsible for documenting your leadership and creating a road map that you can pass to the 2019 producers.

HOW TO APPLY: If you’re interested in applying, first schedule a time to talk with a photojournalism faculty to learn more about this event and to share some of your ideas before applying. Then, email a resume and cover letter, including specific experience you have in project management and ideas you might bring to this event to Josh Meltzer jhmpph@rit.edu no later than Friday, December 1, 2017 @5pm. Anyone is welcome to apply. Organize your thoughts and ideas in your cover letter that will demonstrate your ability to lead a team, develop creative ideas for the coverage and solve problems. The two students selected for the independent study will be notified before the last day of classes.

Kiki BanannaHammock, a drag queen at Tilt, a local Rochester night club, poses for a portrait at RIT on Nov. 11, 2017. Kiki graduated from RIT in 2016 and is now an ASL interpreter for the school. 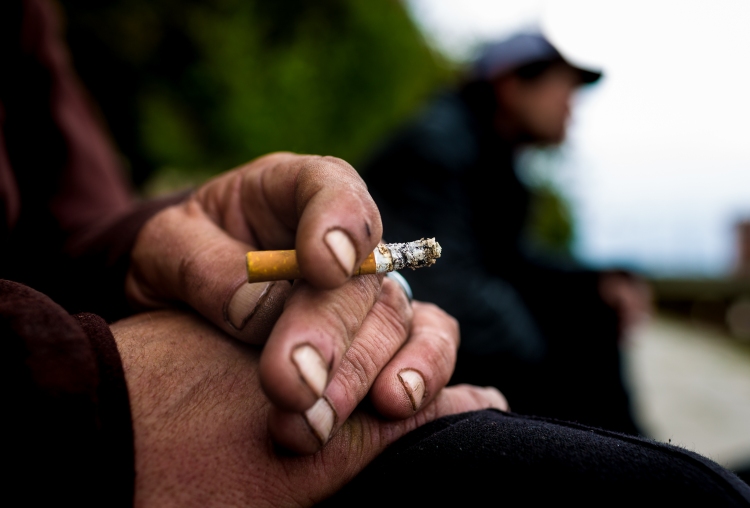 “Keep your life moving forward. I’m stagnant…I slept in a parking garage last night because it was too fucking cold.” Robert ‘Bob’ B. (last name redacted) smokes a used cigarette he found on the ground while looking out at the Genesee River in Rochester, N.Y. on Nov. 3, 2017. Bob is a homeless alcoholic struggling to reach sobriety so he can work as a drug and alcohol counselor.

“I can cry in front of them, I can tell them my secrets. I buy them things and they calm me down. I just feel comfortable around them,” says twenty-six year old Lisa Schalm as she poses for a portrait inside of her bedroom in Brockport, N.Y., on Oct. 14, 2017. Lisa suffers from depression, anxiety, and borderline personality disorder and said that these reborn dolls are the only solution to help calm her symptoms. A reborn doll is a manufactured skin doll that has been transformed by an artist to resemble a human infant with as much realism as possible. 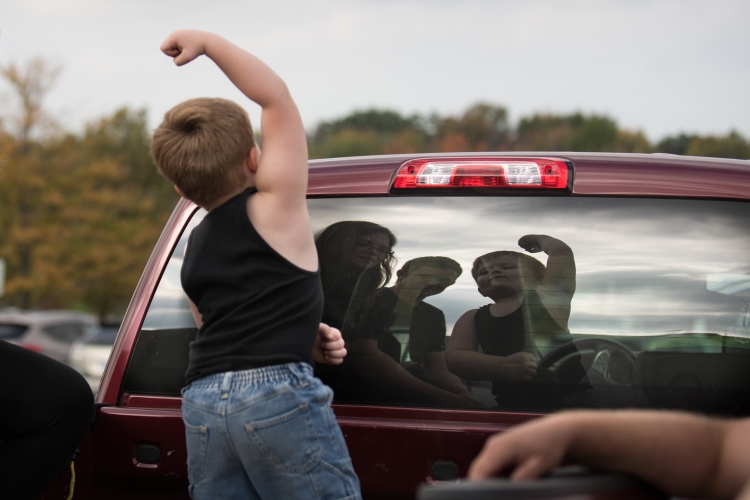 4-year-old Austin Bainbridge boxes with his window reflection while his 2nd cousin, Megan Werner and her boyfriend, Jacob Chesnes (cq) watch-on at Rochester Institute of Technology in Henrietta, NY, on October 14th 2017. Bainbridge had fun during the day’s homecoming events, but the family took a break to relax together in the parking lot.

NYNY Dueling Pianos’ Steve (last name withheld) left, and Eddie (last name withheld) perform at Rochester Institute of Technology, Henrietta N.Y. on Sept. 13, 2017. The performers asked the audience to turn on their flashlight for the last song of their set. Brick City Homecoming and Family Weekend is an annual event held at Rochester Institute of Technology.

Maxwell Harvey-Sampson works at the Bachelor Forum as a bar hand and is moving towards being a freelance photographer after graduating with a degree in fine art photography.

ORCHARD PARK, NY – SEPTEMBER 24: LeSean McCoy #25 of the Buffalo Bills kneels during the national anthem before an NFL game against the Denver Broncos on September 24, 2017 at New Era Field in Orchard Park, New York. (Getty Images) 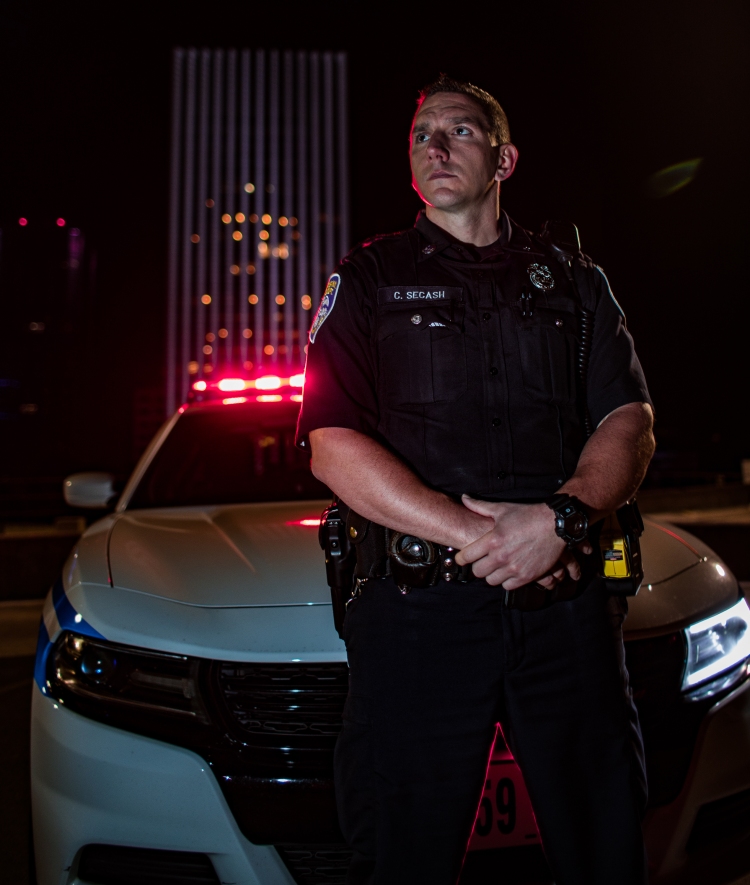 Officer Christopher Secash (cq) of the Rochester City Police Department poses for a portrait in front of his patrol vehicle in Rochester, N.Y. on Oct. 3, 2017. Secash says he works ,” to help make a better community” and uphold the motto, “protect and serve”.

Jamie Strussenberg, 46, gets ready to pose for a portrait with her reborn dolls in Corbett Pond Park, while a family in the background climbs a tree in Brockport, N.Y., on Sept. 24, 2017. Jamie has been collecting and creating Reborn dolls since 2016 as a way to help cope with her anxiety. To date, she has sold 20 dolls across the country and continues her craft on a daily basis. A reborn doll is a manufactured skin doll that has been transformed by an artist to resemble a human infant with as much realism as possible. 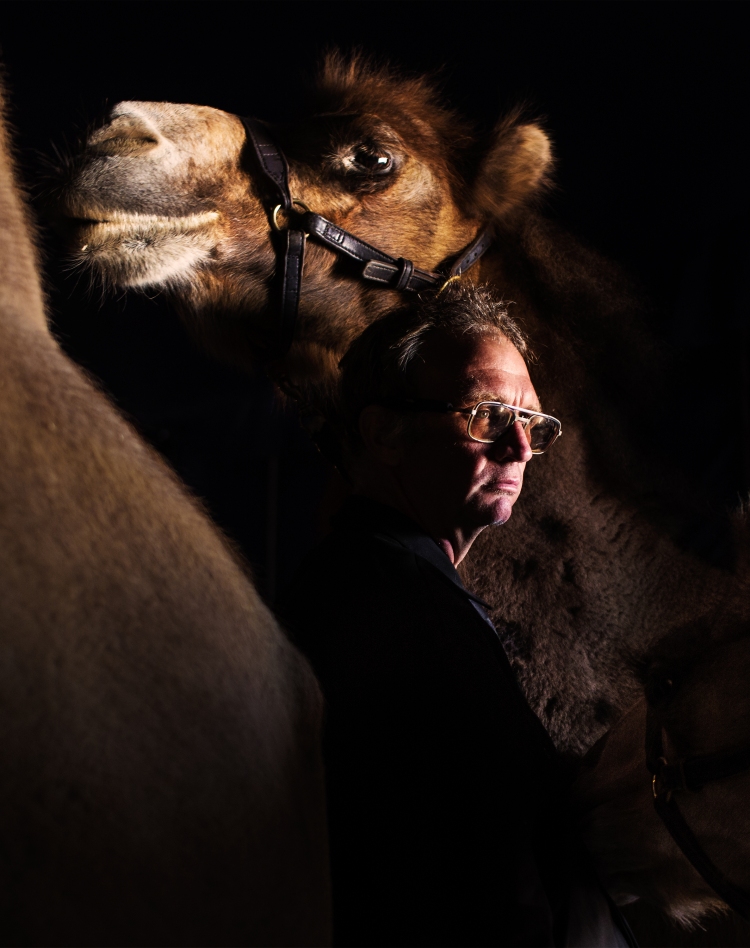 Adam Baker (cq), an animal care taker for Coronas of Hollywood, a Florida circus performing at The Great New York State Fair in Syracuse, N.Y., tends to a group of Bactrian camels waiting for their performance on Sept. 2, 2017. Baker has worked with Coronas for just over a year and is said to have a strong bond with many of the animals in the circus.

Dan Murphy, on the right, face his punching bag during one of his workouts. He had been with the workout program at the Boxing Boot Camp since it started in Novemer 2016. The camp specialized for those who are battling Parkinson’s Disease. 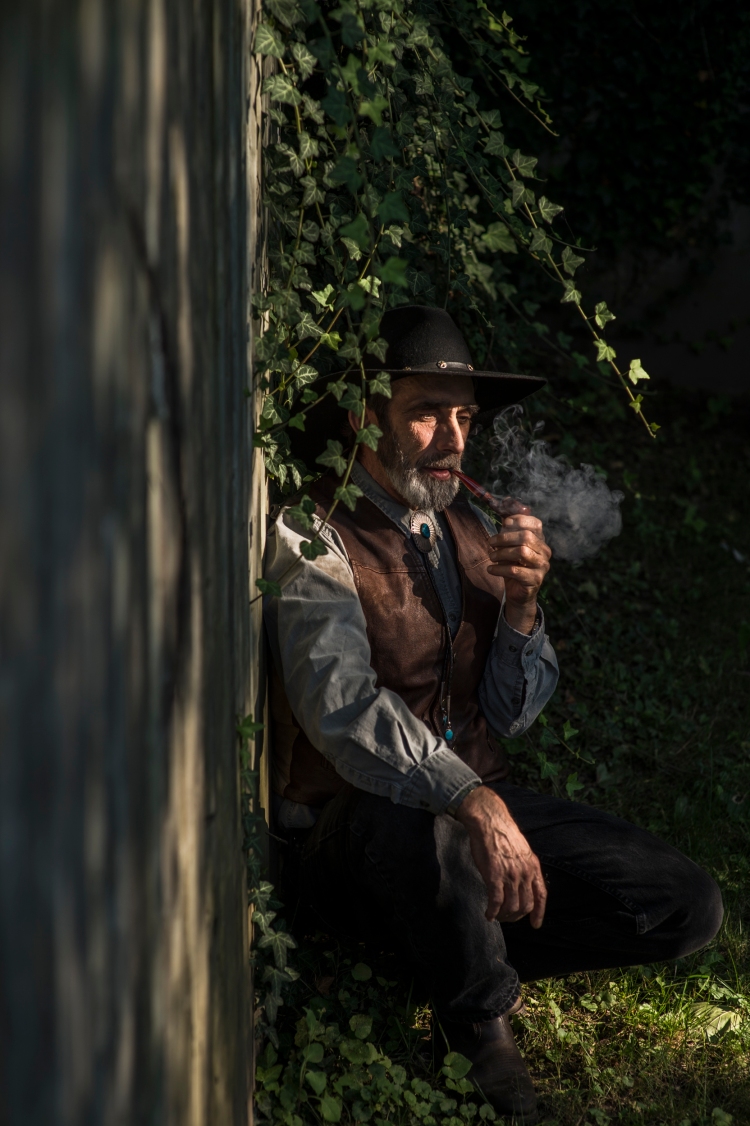 Dave Paskell, 56, poses for a portrait in the backyard of his home in Rochester, N.Y., on Sept. 10, 2017. “Sometimes I feel as though I was born at the wrong time. My mannerisms, sensibilities and moral compass seem those of the past. Yet at the same time, I’m inexorably part of the present looking through an open door to the future,” said Dave. 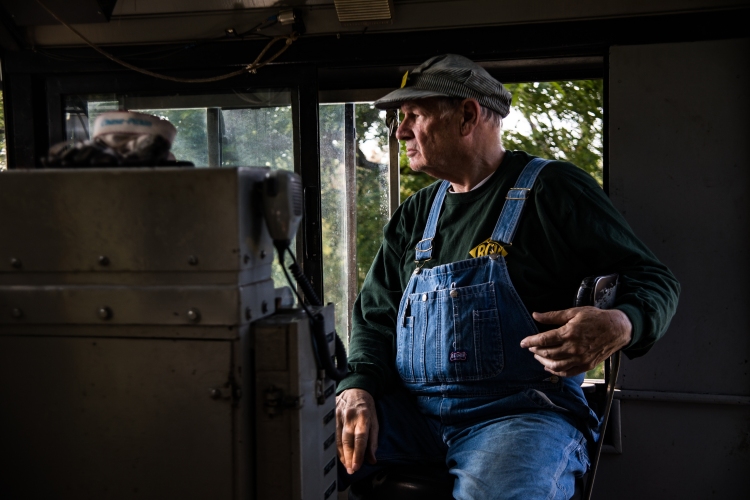 Jerry Tusch drives a train back to Industry Station during the “Diesel Days” event at the Rochester and Genesee Valley Railroad Museum in Rush, N.Y. on Sept. 16, 2017. 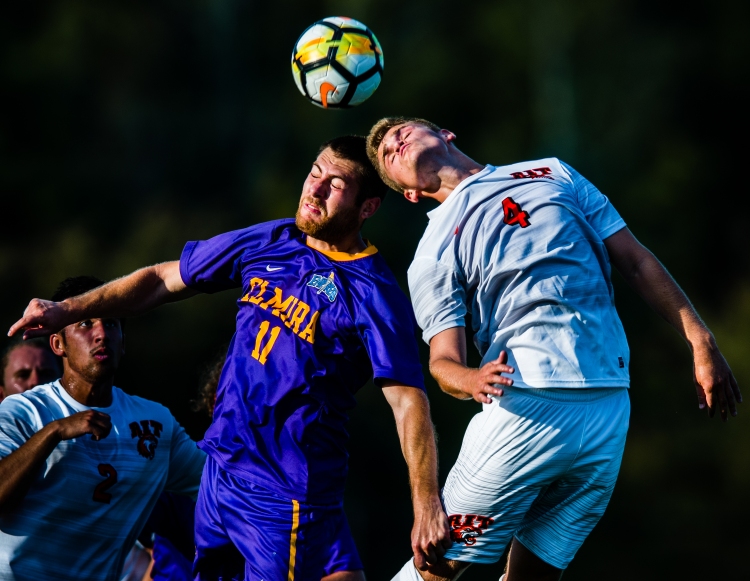 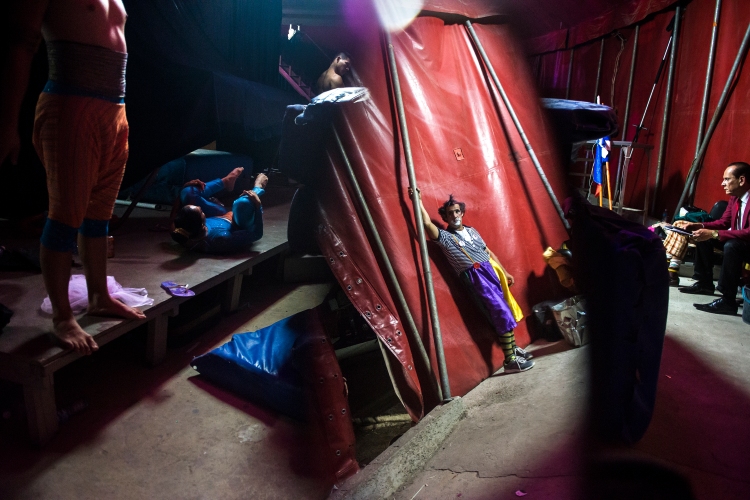 A clown is reflected in a mirror while circus performers wait backstage during the International Circuba Festival in Havana Cuba, on June 27, 2017. The International Circuba Festival is considered among the ten most important of its kind in the world and was attended by 34 acts of representatives from different countries like Argentina, Colombia, Chile, Spain, United States, France, Peru, United Kingdom, Russia, Italy , Uruguay and Vietnam.

Elvedine, 8, oldest son of Gentiane Qakolli, reaches to change the television channel in his new home within the Gurrakoc Prison, July 26, 2017, in Gurrakoc, Kosovo. In Kosovo, a small Balkan state of just under 2 million people, there is a former war prison that was closed during the Kosovo war in 1999. The dilapidated, burnt, and crumbling walls have now become home to several families; whose personal and cultural history have placed them in dire need of shelter. Family sizes rang from 1 to 6 children. Most living quarters per family consist of 1 or 2 rooms.

A young man explores “Katena,” an inflatable luminaria sculpture presented by the Architects of Air, during Musikfest in Bethlehem, Pa., on Aug. 10, 2017. Musikfest is a ten-day outdoor music festival with more than 1 million visitors annually. 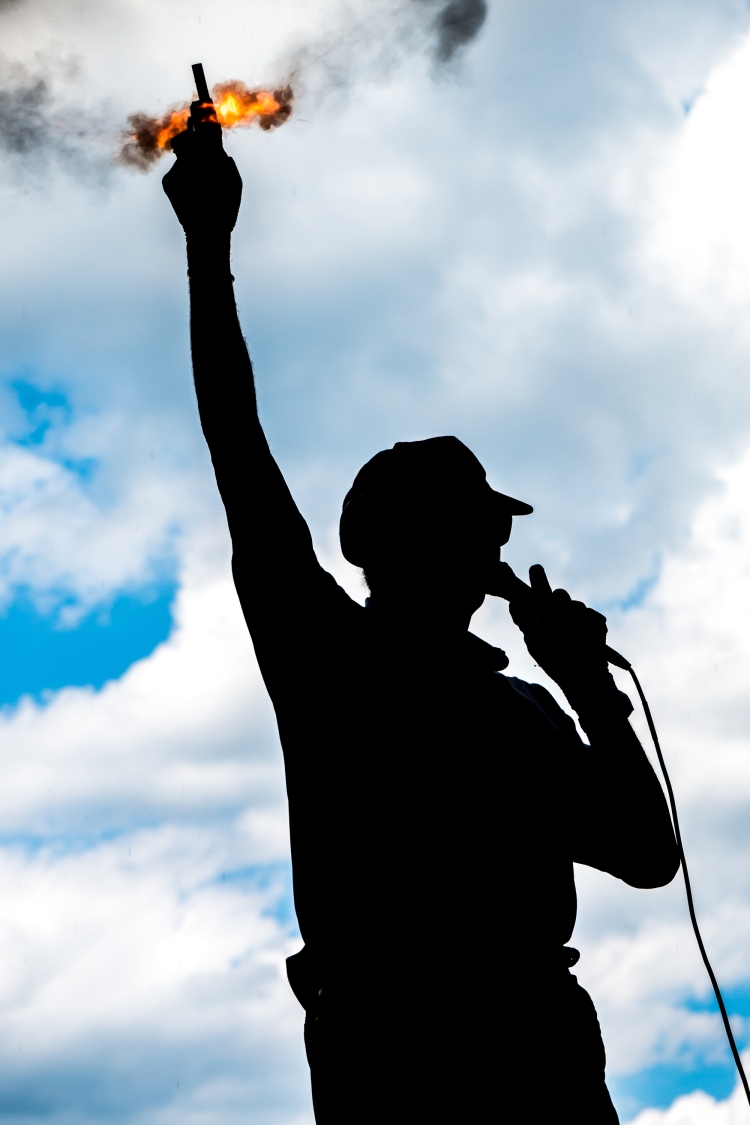 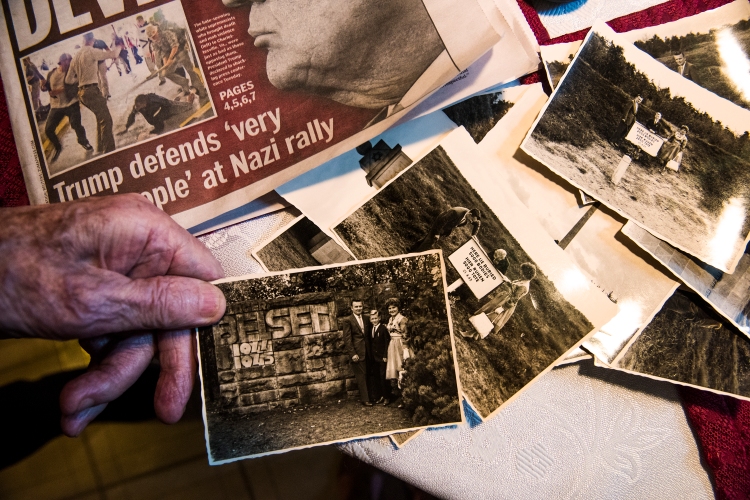 “I never forget that day. April 15th, 1945, Sunday, 3 o’clock. It was a beautiful day. The British came with tanks and we were free. I was 18 years old and weighed 79 pounds.” Theodore Lapinski, 90, recounts the day he was liberated by British soldiers at Bergen-Belsen, a Nazi concentration camp in northern Germany in his home on August 16, 2017. The soldiers discovered 60,000 prisoners inside, most of them half-starved or seriously ill, and another 13,000 corpses lying around the camp unburied. In 1960, Lapinski returned to Belsen with his wife and son to visit the Bergen Belsen concentration camp memorial. “I made a lot of friends, I’m lucky I survived.”

Congratulations to the winners of this week’s Picture of the Week! Traci Westcott won first place, and Jed Plumley second place!

Judith Jordan, 6, leans in to her mom, April Jordan during her last appointment at Welcome Home Midwifery in Pittsford, NY. Judith has accompanied her mom to most appointments during the pregnancy, and plans to cut the babies umbilical cord after he arrives.

Congratulations to the winners of this week’s Picture of the Week! Traci Westcott won first and second place, and Brittainy Newman won third place! 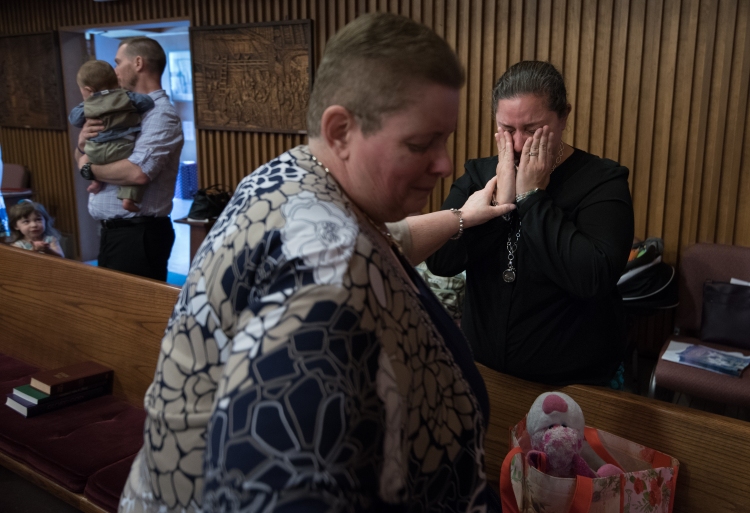 Anita Manuele comforts her daughter, Catherine Kwiecien (cq) after Easter Sunday mass at Trinity Reformed Church in Brighton, NY. Kwiecien’s 5-year-old daughter was diagnosed with Rhabdomyosarcoma, a cancer of muscle tissue, for the third time in January of 2017 “Church is always really hard for me…it’s just one of those places…” says Kwiecien. 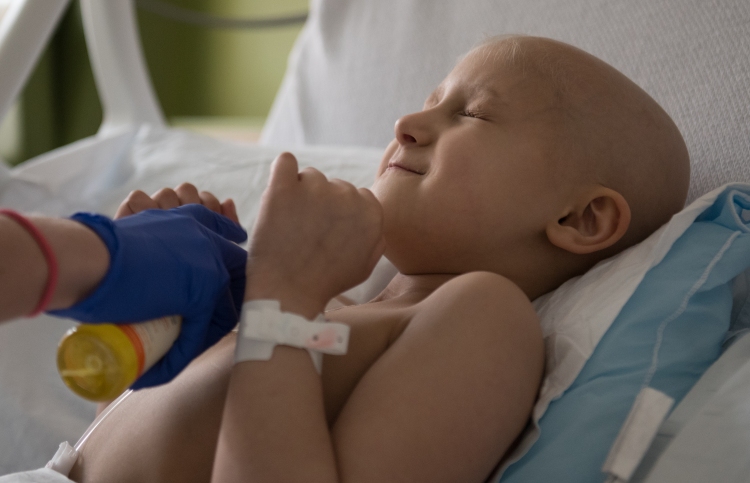 Kailee Kwiecien (cq), 5 braces herself for a cold mist of adhesive remover while her nurse begins to peel back the bandage over her tubular catheter attached to her access port. Kwiecien just completed 5 days of inpatient chemotherapy in her sixth cycle of her treatment at Golisano’s Children Hospital.